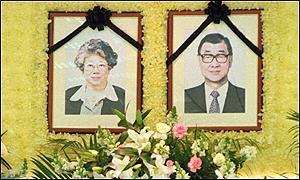 The tragic deaths of the governor and four other top officials of the Taiwanese central bank in a plane crash is the latest in a host of calamities to hit the institution, according to a Taiwan newspaper.

The Economic Daily News reports that the bank has been plagued by bad luck since it moved to new premises in 1994.

But rather than believing that they are just a series of random events, the building's critics are attributing the bank's problems to bad "feng shui".

Feng shui, or geomancy, is the Chinese belief in a need for harmony and natural order in the environment.

Geomancers are often consulted when buildings are being designed so they can give their advice on the construction.Feng Shui masters can be highly paid for their advice which, it is believed, enhances luck and well-being.

The paper reports that the bank has long been criticised for its bad design. Construction of the square-shaped, multi-storey, concrete building was reportedly hampered by a number of setbacks: bankruptcy of the construction company; a fire on the roof; and a worker being injured when he fell off the building.

The bank's former governor, LiangKuo-shu and Chang Pao-hsi, director of the foreign exchangedepartment, have both died during their tenures at the bank.

The front of the central bank headquarters directly faces theroof corner of the traditional National Theatre Hall. This is a feng shui taboo. Feng Shui believers say the corner of the theatre acts as a focus, directing negative energies onto the bank.

Practitioners have recommended a series of improvements to wardoff the effects of bad feng shui but the paper said these were often ignored.

Governor Sheu Yuan-dong and his officials were among 200 peopleon board a China Airlines plane which crashed near Chiang Kai-shekInternational Airport on Monday.

They were returning from a meeting of regional central bankers in Bali, Indonesia.